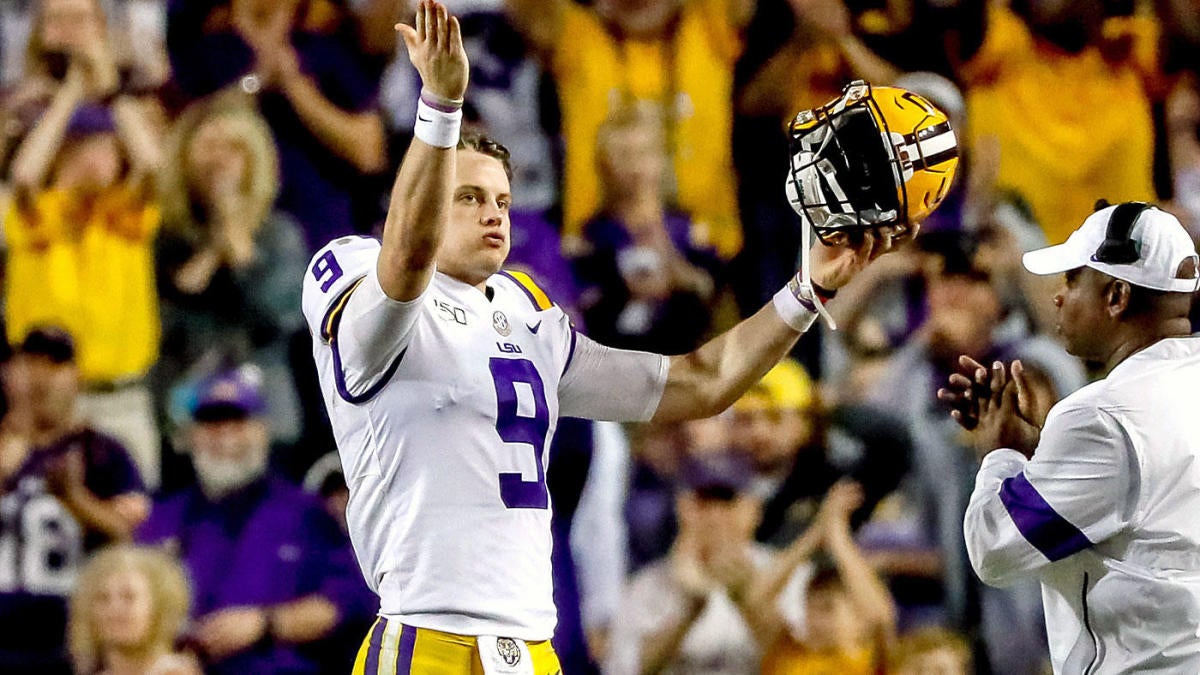 Best ever? That might be a label worth considering for LSU’s Joe Burrow.

Check that. Best season ever … by a quarterback. It’s worth discussing considering the numbers, the winning, the personality and the transformation of a career, a team and a program.

But none of them went from NFL Draft afterthought to projected No. 1 overall pick. None of them packaged an undefeated season with an SEC title and survived a College Football Playoff to get to the brink of a national championship.

That national crown is the last step. Chasing it is a kid from rural Ohio, a transfer from Ohio State who embraced Louisiana, its culture and its team.

“Standing at the 50-yard line before each game and the Saints run out … Drew Brees is gathering his thoughts before he walks in that huddle and gives them a pregame speech,” recalled LSU passing game coordinator Joe Brady, a former Saints offensive assistant. “And you know there is not a person in that stadium or person in that huddle who doesn’t feel like we have an opportunity to win. … We have that at LSU. I feel that way about Joe Burrow.”

What follows are 10 things to consider about Burrow and his incredible 2019 season as we begin that best-ever debate. In the process, CBS Sports mixed in the reaction of various football sources.

1. There have been only eight quarterbacks in history to win a Heisman Trophy and national championship in the same season, none since 2013. That was the year Jameis Winston led Florida State to the national title in the last year of the BCS. (Pay attention Winston’s shockingly low interception total that season, 10.) Before that, it was Cam Newton, almost as a one-man offense for Auburn. Before that, it was Matt Leinart (2004 USC), Danny Wuerffel (1996 Florida) Charlie Ward (1993 Florida State).

“This transformation from a seemingly average guy is truly amazing! Remember, Ohio State let him walk out the door!  … On the run? When was the last time something bad happened when he extended the play? Ability to make plays with his legs? Check. Freakish football season.” — Rick Neuheisel, CBS Sports college football analyst, former Pac-12 coach

2. Burrow would be the first player to lead the country in completion percentage while throwing for 5,000+ yards and 50+ touchdowns. Seventeen players have thrown for at least 5,000 yards. Seven have thrown at least 50 touchdown passes. What makes those benchmarks so remarkable is Colt McCoy. In becoming the Heisman runner-up in 2009, the former Texas quarterback completed 76.7 percent of his passes. That record has stood for 11 years. Burrow would have to go 13 of 25 (52 percent) in the CFP National Championship to finish below McCoy’s 2009 mark of 76.7 percent. The last time Burrow finished below 52 percent was 19 games ago in the 2018 Alabama game.

3. How accurate is Burrow? The answer begins with … wow! To put it in perspective, Burrow completed 57.8 percent of his passes in 2018 (219 of 379, 77.6 percent). To reach that mark the season prior, Burrow would have had to complete an additional 336 consecutive passes.

“Not a fan of absolute judgements in the moment but who’s ever had a better year?! Never had a clunker game this season, either.” — Charles Davis, Fox analyst, former Tennessee defensive back

5. Burrow can break Colt Brennan’s single-season record for touchdown passes with 58 (2006 Hawaii). This is real simple to put in perspective. Brennan set that record in a conference that no longer exists — the Western Athletic Conference. Twelve of those 58 scores came against four Power Five schools: Alabama, Arizona State, Purdue and Oregon. The rest came against the likes of Eastern Illinois, New Mexico State and Idaho.

“Never seen anything close to his performances in a single season!” — Steve Clarkson, owner of Dreammaker quarterback camps, throwing coach for Leinart

6. Ed Orgeron went for it. In the offseason, he hired a 29-year-old Saints assistant (Joe Brady) to install the spread for a transfer quarterback who had completed less than 60 percent of his passes. One of the results was Burrow becoming arguably the best quarterback in the last five years. Since Pro Football Focus has begun keeping stats in 2014, Burrow’s had the best season in Wins Above Average (2.52). Ohio State’s Justin Fields was second this season at 1.78. “He’s the highest-graded passer under pressure and is setting LSU and PFF College records in the process of a historic season, the likes of which we haven’t seen,” PFF wrote in November 2019.

“Quarterbacks are not game managers. You don’t come to LSU to manage games. That’s not what we are looking for. You come to excel at the biggest stage.” — Joe Brady

7. It’s not just Burrow. LSU is loaded offensively. Evidence: When Oklahoma decided to zero in on Biletnikoff Award-winning wide receiver Ja’Marr Chase in the playoff, Burrow thought nothing of leaning on Justin Jefferson. The result: Jefferson caught 14 balls for 227 yards and four touchdowns.

“Impressive but also a product of the times. Spread offenses/formations have given these guys such easy completions. Not to mention protection for pass catchers with targeting. Quarterbacks can make tighter window throws not worrying about repercussions.” — Brady Quinn, CBS Sports HQ analyst, former Notre Dame quarterback

“We have five NFL guys in routes every single snap, and it’s tough to cover. You kind of have to pick your poison. We have three receivers that can beat you at all times and a tight end and a running back that can beat you in routes, as well. We’re a tough match-up for a lot of people, and then I just try to get the ball in their hands on time and accurately and then let them do the rest.” — Joe Burrow

9. Burrow is another reminder that Heismans are clinched in November. In the season-defining game at Alabama, he threw for 393 yards and three touchdowns. At least as big were his 64 rushing yards in the face of Alabama’s withering defense. It had been 60 years since LSU’s last and only Heisman.

“LSU fans have always had this running joke that the answer to every trivia question was always Billy Cannon. So now we have a new answer.” — Jason Ramezan, former LSU vice president of alumni engagement