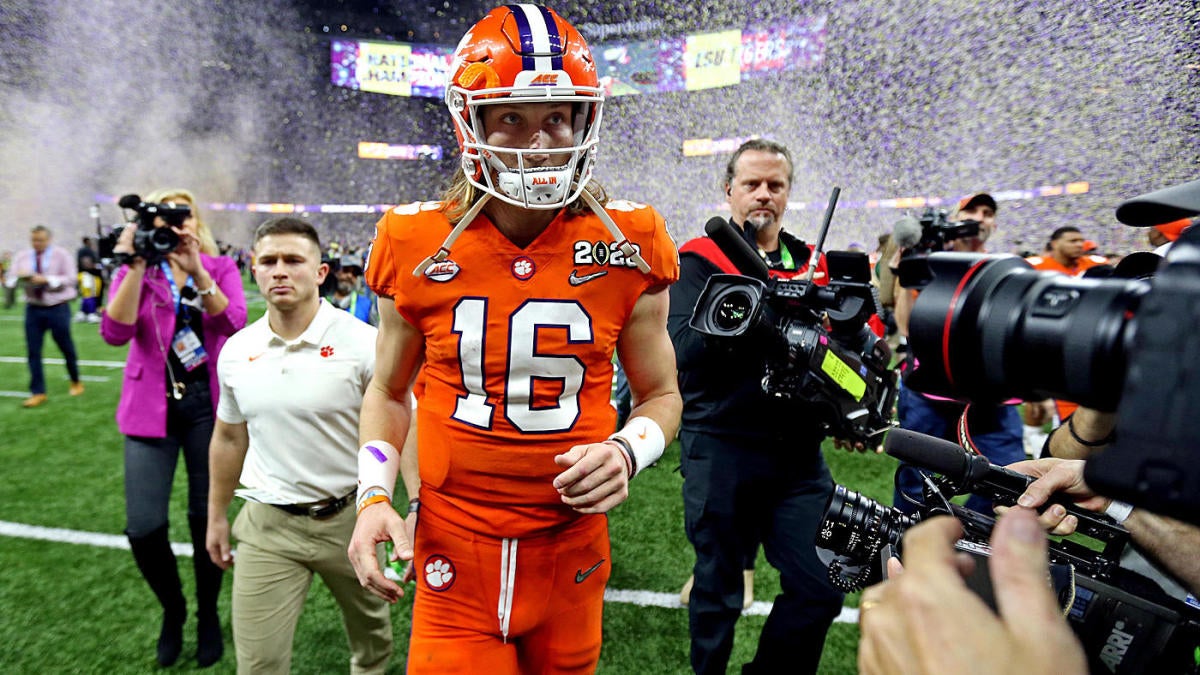 NEW ORLEANS — As confetti fell from the sky and No. 1 LSU was firing up victory cigars at the conclusion of one of the best seasons we’ve ever seen by a college football team, Dabo Swinney and No. 3 Clemson were left in an unfamiliar position: being on the losing end of a game Monday night in the 2020 College Football Playoff National Championship.

Losses haven’t been all that common for Swinney’s Clemson program recently with his Tigers only dropping five games since the start of the 2015 season. They are even more rare for quarterback Trevor Lawrence, whose immaculate 25-0 record as a collegiate starter now has a “1” in place of the “0” following a 42-25 loss to LSU.

Lawrence and Clemson in general didn’t have a great game, falling more than a few plays short compared to the newly crowned national champions. Clemson went 1 for 11 on third down — the worst third down percentage in Swinney’s history as a coach — and was outgained 628-394 in the game. Lawrence completed less than 50 percent of his passes and failed to throw a touchdown pass for the first time in a college game that he started and finished (the only other game with zero passing touchdowns was against Syracuse in 2018, when Lawrence was knocked out of the game in the second quarter).

“At the end of the day, I just didn’t play well enough for us to win,” Lawrence said. “Too many missed plays by me. Missed a lot of receivers, and it just wasn’t my night.”

The overall poor performance by Clemson puts an incredibly disappointing cap on one of the best runs in the modern era of college football. Winning 29 games in a row in incredibly difficult and deserves credit, but the aftermath of Monday night’s loss also brings into perspective how far Swinney’s program has come over the last decade.

Eight years ago, Swinney was on the losing side of the Orange Bowl. He was left having to make some familiar justifications. West Virginia had hung 70 points on Clemson right after the joyous celebration that was the program’s first ACC championship in 20 years. There was hurt, but there was also belief in a vision that saw Clemson elevating its status. As a former player and fan of college football history, Swinney said at the time that the conference title was just the first step in climbing the mountain.

“From where we were in 2009, my first year, to where we are now, [we’ve] been in five straight playoffs, and we’ve won two out of the last four national championships, and we’ve been in four national championships,” Swinney said. “You know, I think we’ve got 69 wins in the last five years, which is the most ever in the history of college football over that span. So we’ve built a program of consistency, and that’s really what it’s about to me.”

Each step in Clemson’s climb has been met with some adversity along the way. There was so much excitement for the Tigers’ first College Football Playoff selection that they held a pizza party in Death Valley in 2015. That year ended like this one with Clemson on the losing end of the national title game. Only now, there’s no pizza party for making the playoff because the playoff has become the expectation after five straight appearances in the four-team field.

Now, the expectation at Clemson is to win it all, and the frustration that comes with falling short of that lofty goal is part of the process for these Tigers to take the next step.

While technically the underdog in this matchup against LSU, according to the oddsmakers, Clemson can no longer lay claim to being an underdog.

LSU had an all-time season with a historic star quarterback and played not only well enough to win it all on Monday but decisively better than Clemson. There’s no participation pizza to come Tuesday morning, only the knowledge that it must own this loss and make it part of the program’s story in 2020 and beyond.

When Lawrence and the Tigers return to action next season, they’ll not only do it with added fuel from the team’s first loss in more than two dozen tries but likely with the No. 1 recruiting class in the country added to the roster. Fifteen of those freshmen are joining the program this spring semester as early enrollees, joining a significantly talented group of first-and second-year players already returning to the team.

All of Clemson’s success over the last decade was thanks to the efforts of top-15 and top-10 classes that benefited from elite prospect evaluation and player development. Now the raw talent level of this program has it the point where Clemson is winning battles against the likes of Alabama and Ohio State.

The Tigers didn’t play well on a big stage against an elite opponent, and they have to own that both Monday night and going forward. What’s next is, potentially, another level up moment for a program that has already made national championship contention the annual expectation.

Swinney loves to talk about “little ol’ Clemson,” but even in defeat, it’s worth remembering that Clemson is now one of college football’s big ol’ juggernauts.