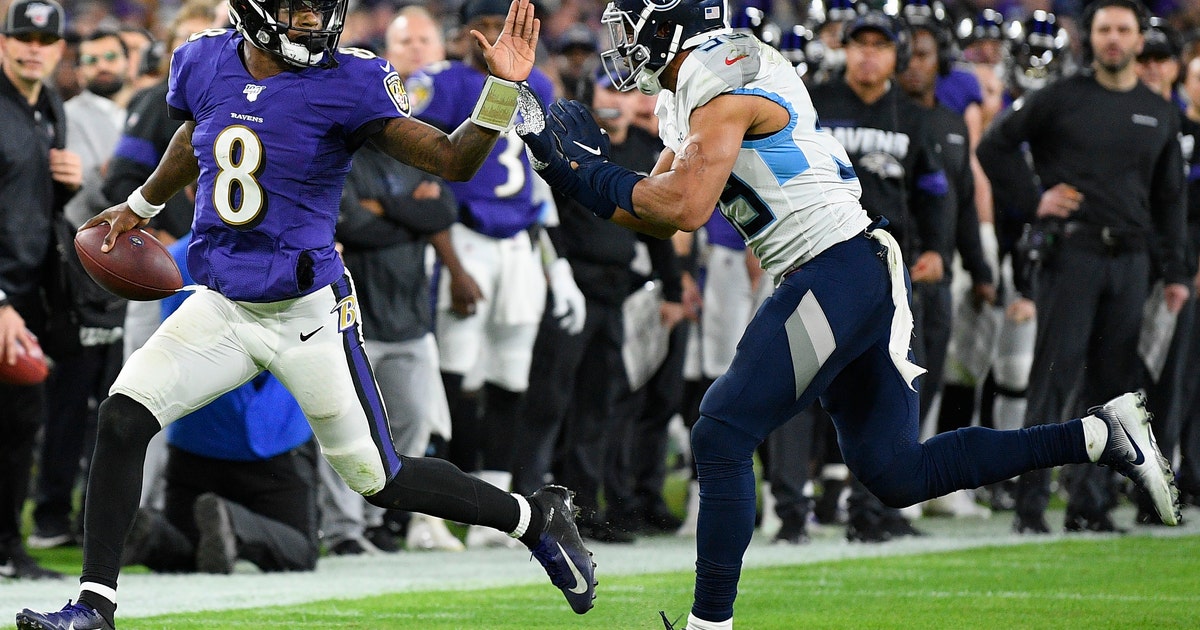 BALTIMORE (AP) — The Lamar Jackson who ran with abandon and thew 36 touchdown passes for the best team in the league failed to show up in the playoffs — again.

During his marvelous second season in the NFL, Jackson was an All-Pro quarterback who carried the Baltimore Ravens to the best record in the league. Jackson amassed the most yards rushing by a quarterback in league history and was the catalyst of an offense that led the NFL in scoring.

He put up some gaudy numbers on Saturday night against Tennessee — running for 143 yards and amassing 365 yards through the air — but Jackson also threw two interceptions, lost a fumble and failed twice on fourth-and-1 carries and led Baltimore to just one touchdown in a 28-12 upset loss.

And that is why the top-seeded Ravens are done for the season, much sooner than expected. Baltimore’s 12-game winning streak, home-field advantage and status as the top seed in the AFC proved completely irrelevant.

“We just beat ourselves. I had a lot of mistakes on my behalf,” Jackson said. “Three turnovers. That shouldn’t happen.”

Coming off a three-week break and looking appropriately rusty in doing so, an error-prone Jackson didn’t get the Ravens into the end zone until the fourth quarter. That’s exactly what happened a year ago, when Baltimore scored two late touchdowns in their playoff opener against the Los Angeles Chargers.

Jackson’s goal this season was to erase the memory of that game, which came after he guided Baltimore to a 6-1 finish. Jackson went 2 of 8 for 17 yards and an interception in the first half against the Chargers, and the Ravens fell behind 23-3 in a one-and-out playoff performance.

It was Super Bowl or bust this time around, and Baltimore sure looked capable of making that happen. Jackson and the Ravens were virtually unstoppable over the final three months, slapping aside some of the best teams in the league with surprising ease.

Jackson is 19-3 as as starter during the regular season and 0 and 2 in the playoffs. Now he’s got to live with that for a year.

“I know how he’s going to respond,” coach John Harbaugh said. “He’s going to respond by being extremely motivated and determined to improve as a football player. The strides he made between last year and this year are pretty indicative of that.”

That’s what made this game so darn surprising.

The Ravens were 8 for 8 on fourth-and-1 situations this year. Jackson went 0 for 2 in this one, getting stuffed at the line of scrimmage on each occasion. Both times, the Titans went the other way for touchdowns.

“I hate losing. I really do,” Jackson said. “We’ve just go to try hard next time around and convert it.”

Jackson’s 50th pass of the night, on fourth down in Tennessee territory with just over 4 minutes left, hit the ground with a thud — just like Baltimore’s season.

Jackson finished 31 for 59, the Ravens made 29 first downs and racked up 530 yards. The main number, however, was 12 — the number of points Baltimore scored in its lowest output of the year.

Jackson doesn’t deserve all the blame for the collapse. Heck, the Ravens twice were penalized on punt returns without even getting their hands on the ball. And another All-Pro selection, Marcus Peters, was burned badly by Kalif Raymond on a 45-yard touchdown pass immediately after Jackson failed to gain the yards necessary to maintain possession.

As the Ravens entered their bye week, veteran guard Marshal Yanda spoke prophetically about the relevance of Baltimore’s magical season in relation to the playoffs.

“It only takes turning the ball over one or two times, a penalty here and a penalty there. All it takes is one loss and we’re done,” Yanda said. “That 14-2 stuff does not matter.”